All people have their cultural beliefs, and in Cuba, they have many beliefs surrounding bad luck. In Cuba, a Latin American country, newborn babies are gifted with a good luck charm that is thought to keep away bad luck and thoughts. This charm is known as Azabache and is either worn as a necklace or bracelet to protect babies from the Evil Eye or Mal De Ojo.

In most Latin countries, the common belief is that when a person gives you or your child a jealous look, that is a sign of Mal De Ojo. If you suffer from the curse of Mal de Ojo, you are very likely to encounter bad luck all the time or even get injuries. Protection from the Evil Eye is only through the Azabache charm.

Azabache is a Spanish variation of the jet gemstone, which is believed to dispel curses and bad energy. Jet stone is an organic product formed from the natural decomposition of wood from the Araucariaceae, which became extinct some 65 million years ago.

The jet stone is easy to carve or cut as it has a uniform texture, making it easy to carve with great accuracy. The modern forms of the Azabache charm are a gold bracelet with beads made from jet and red coral. These amulets may have a fist charm or the Mano Figa Azabache, which means Fig Hand. Jet Stone is also known as Lignite, Gem Lignite, or Black Amber.

Does the Mal De Ojo Exist?

Even if you do not believe the Mal De Ojo, the concept exists in most cultures worldwide. Even the ancients recognized the effects and power of an evil human stare. Whether it is pure belief or superstition that is backed up by coincidences, the Mal de Ojo is a cultural belief shared by most people, and each culture has its form of protection.

In Turkey, Iran, Greece, Armenia, and all over the Middle East, the ancient protection talisman is known as Nazar Boncuk but is more predominant in Turkey. The Nazar Boncuk is everywhere in Turkey, from offices, doors, buses, taxis, planes, etc. It is given as a gift and thought to bring good luck. As Shamanist nomads, the Turks traveled through Central Asia to arrive at present-day Anatolia. This influence could be why the Nazar Boncuk is a combination of their ancestral traditions and those countries they traveled through.

The evil eye belief is common in Judeo-Christian culture and is quoted in both the Bible and the Koran. Almost all civilizations of man, all the way from Europe to India, have tried to express the evil eye superstition via amulets and charms.

The evil eye symbol is ancient and can be seen in Ancient Egypt’s hieroglyphics. The eye of Horus was painted everywhere, from tombs to Mummies to bring the dead good fortune while they traveled to the afterlife. The Greeks were not left behind and painted the eye on their ships’ brows to protect them from Poseidon’s wrath. Most roofs in Greece are painted blue, which probably arises from the Byzantines’ influence where blue was the color of water and heaven and sacred. Blue symbolized the divine, infinite, spiritual, and invoked calm, voluptuousness, and peace.

Where Can I buy the Azabache?

The Azabache is very popular worldwide. The Azabache jet stone originated in Spain, and you will find numerous shops in Santiago de Compostela selling the Jet Stone in various forms. Sometimes it is carved into a scallop shell or other shapes that represent the pilgrimage.  The Santiago is where the Apostle James of the Bible is buried and the endpoint for pilgrims in the Camino Santiago pilgrimage.

The Rua de e Acibecheria or the Street of Azabache, was the once designated street for artisans who made and sold protective amulets. When the Spanish ventured into the Americas, they took these protective stones with them for protection. This means that all the places with dominant Spanish influence, such as Cuba, the Dominican Republic, Puerto Rico, and other areas, use the Azabache stones. However, you can easily buy the Azabache charm online in various online shops, including Amazon.

How to Bless the Azabache

The Azabache is a protective stone and is especially useful in protecting against the Mal de Ojo. Baby girls are generally gifted a jet bracelet or earrings while baby boys get brooches. Adults can wear Azabache jewelry that has gold or red glass beads or red coral for protection.

Azabache stones can be used for spiritual healings. When a person has an injury or pain from a curse, the healer might place a piece of jet on the painful area. If the pain goes away, it is because the pain was due to an evil eye curse, but if the pain persists, then the person has to see a doctor.

Jet is known for absorbing and holding on to negative energy. The best way to reset the Azabache, get rid of the negative energy, and restore its energy is to bury it overnight in the Earth. You can use sea salt to cleanse it from absorbed energy. Cover the stone in sea salt and leave it for twelve hours. You can also have a High Priest or Priestess bless it or leave it overnight under the moon.

What the Azabache Bracelets are Used For

In ancient Rome, bracelets or armillae were adorned by soldiers on their left arm, signifying military value. The evil eye bracelet is a circle that indicates endless energy or force, meaning the protection is continuously working, endless energy flowing through it.

Which Hand Should You Wear the Azabache?

You should wear the Azabache charm on any hand you choose, as long as it is on your body. The evil eye in the center of the Mal De Ojo bracelet absorbs any negative energy directed towards you.

The Mal de Ojo bracelets come in different colors, each signifying what you want from it. Dark and light blue are the most common and used for general protection. It stands for truth and protects the wearer from evil karma.

Is the Azabache Witchcraft?

The Azabache protects you from Mal De Ojo, which is the evil or malevolent eye. All these are superstitious beliefs and have nothing to do with witchcraft. The Azabache is known to protect the wearer from witchcraft.

What to do When Your Azabache Breaks

A familiar ritual is called an egg cleanse, where you light a white candle, and taking the pieces of the broken bracelet, you utter, “Thank you for your protection, thank you for being my shield, thank you for the love. It is time for you to rest, it is time for you to go.” After saying this, you throw away the evil eye bracelet pieces, throw them in a river or bury them. It is up to you. Another egg cleanse ritual involves lighting candles, uttering some incantations, and waving the egg over your body. Sleep with the egg under your pillow. The next day, the egg is broken in a glass of water in a container believed to collect the negative energy afflicting you.

Should You Keep the Pieces of the Broken Bracelet

Keeping the broken pieces is up to you. Some people prefer to throw them away as they have the absorbed negative energy within them. Please get rid of them, but it is not a must. If you feel like keeping the pieces, put them in a bag and keep them. Another ritual involves dropping three drops of olive oil in a vessel.

The evil eye or Mal De Ojo may be superstition, but it is spread across cultures worldwide. The Cuban Azabache is believed to ward off the evil eye and witchcraft. It could either come in a bracelet or earrings for girls and a brooch for boys.

In Cuba, bad luck is taken very seriously. Indeed, even babies in this Latino country are given a good luck charm to keep bad thoughts away. Called an Azabache, this charm when worn as a bracelet or necklace, will protect against the Mal De Ojo (Evil Eye).

In Cuba (and other Latin countries), it is believed that people giving you or your child jealous glances is a sign of the Evil Eye – or Mal De Ojo. Having the curse of the Evil Eye means you are likely to suffer bad luck and even injury. So, to protect yourself or loved ones, an Azabache good luck charm is worn. Because of this belief, an Azabache necklace or bracelet is a very popular gift given to newborn babies in Cuba. Azabache itself is a Spanish form of jet, a gemstone, and it is long believed that it can dispel bad energy and curses. In modern forms of Azabache charms, you will find a gold bracelet with beads of jet and red coral. These talismans usually have a fist charm made from jet.

As Cubans believe that the Evil Eye can take hold of you just from the jealous glances of strangers, the Azabache can protect you from this. As, by letting the Evil Eye into your life will only result in bad luck and misfortune. Here the jet stone repels bad energy and keeps you lucky.

How To Use The Azabache Charm 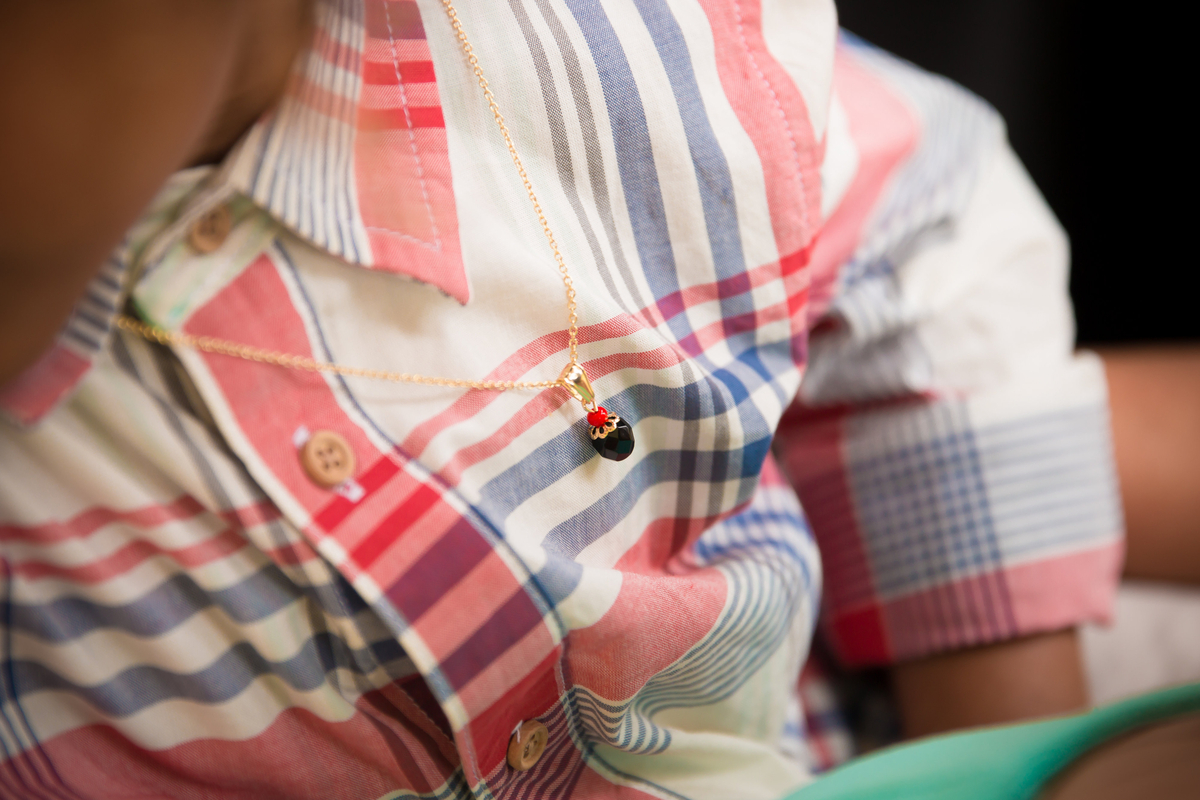 In order to fully protect against the Evil Eye, your need to wear your Azabache stones at all times. This is usually by wearing a bracelet or necklace (usually gold) with jet beads.

How The Azabache Charm Is Made

Jet itself was made millions of years ago through carbon and water compressing together naturally. These stones can then be found mined in certain locations across the globe. The Azabache form of jet originated in Spain. Beads are then formed from this semi-precious organic stone and used on Azabache jewelry. The jet is usually used along with red coral and gold to make for a prettier piece of jewelry.

How To Make The Azabache Charm At Home

As it takes millions of years and incredibly high levels of pressure, you cannot make jet yourself. However, if you like to make jewelry you could buy the component parts separately and make a bracelet. You could even make something more unusual like earrings or a brooch, as all you need to bring luck is some Azabache or jet stones.

Interesting And Fun Facts About The Azabache Charm

● In Turkey, there is a similar tradition of gifting children jewelry to protect them from the Blue Evil Eye.
● Azabache charms are also used in Puerto Rico.