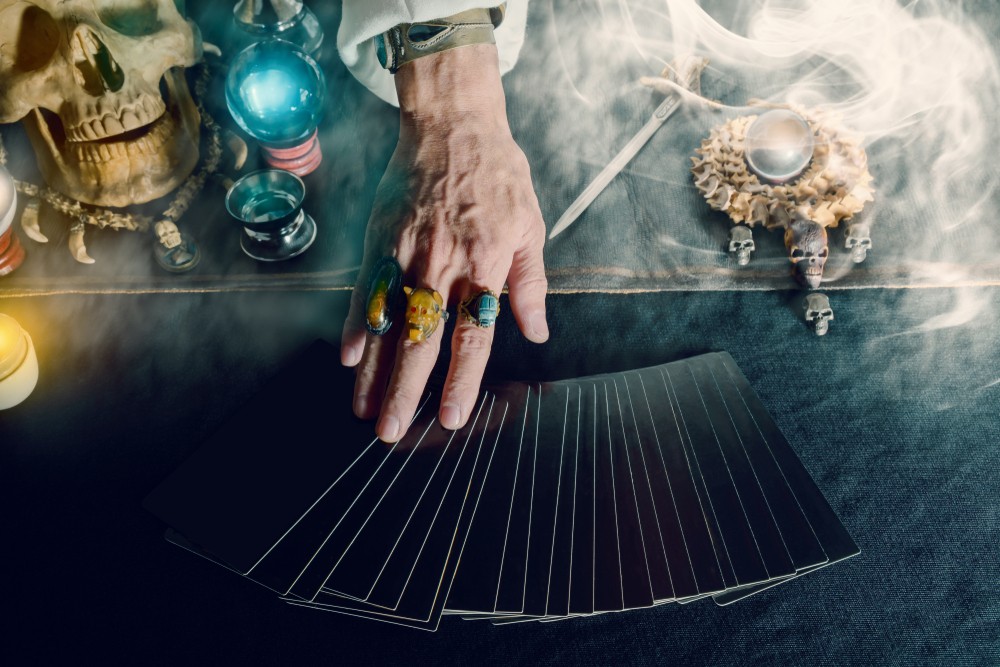 It was a time when the mysteries of science were emerging but religion was still a powerful influence on the people. Yet, many of the superstitions that dominated Elizabethan Britain dated far back into time. There was the mysterious influence of old magic and the natural properties of animals and herbs. There were witches who had their broomsticks and their potions and familiars. There were the superstitions of touching wood, seventh sons, spilling salt, ladders and more.

Why so much superstition?

In a time of ignorance and fear, it is not surprising that there was reliance on superstition. There was a false belief in the concept of cause and effect. There was an overwhelming sense that fate could be controlled with the right combination of rituals or avoidance of people and behaviours. Many of the beliefs are based on an illogical belief that an object, action, or circumstance can be controlled using magical forces. Many of these go back to the Dark Ages and even further back to the Romans – where there was a deep belief in mythical relationships.

The power of witches

If you ask someone why witches existed at all some would say it was a means of controlling women. The fear of women who had knowledge of how to manipulate natural chemistry led to their persecution. There were 270 witch trials in Elizabethan English – 247 of these were women and only 23 were men. These women were blamed for everything from the bubonic plague to the great fires of the time. Any bad fortune was perceived as malevolence on the part these old and poor women who were likely single or widow. They would have been the wise women of our culture who kept pets as company.

There were five basic superstitions surrounding women. First, witches could fly, mostly to explain why they could be in these other places so quickly. If a fire happened in the next county, without the aid of flight it may have taken days for her to travel. Being able to fly resolved these practicalities.

The witches were often old women. It is likely because these are widows with no man to offer protection. Also, they were considered odd, as they lived alone in isolated places, allowing for myths to build. It is likely that the woman was close to nature, used to living off the land. She would likely have a pet as company that was perceived to be an evil spirit, a familiar, walking by her side. Finally, the woman’s knowledge of herbs and elements in nature was interpreted as magic, as they created potions in large pots – or cauldrons.

There were many superstitions in Elizabethan England that continue into today. Many seem silly when explained but it is notable how we still feel the need to follow traditional behaviours, just in case there was a chance it was true.

A great example of this continued irrational behaviour is the saying “God Bless You” after a sneeze. It may have been shortened to “bless you” in our modern world, but the reason for saying it will still be the same. There was a belief that the devil was able to enter your body when your mouth opened. Therefore, when you sneezed, you gave evil chance to possess you and the blessing was a way of warding off this devil.

An alternative interpretation of why we say “bless you” comes from the time of the plague. A sneeze was one of the first symptoms of the deadly disease. Therefore, the use of “God Bless You” was the recognition that you needed the good fortune from a higher being to survive what was to come.

There was also some easier to explain superstitions that are purely an impact of ignorance. An eclipse, whether of the moon or the sun, was felt to be an omen of evil. The symbolism of darkness prevailing is written into most religious texts. Consequently, as they did not have the understanding of the wider universe at this time, they had every right to a belief that bad luck was coming their way. The black cat is linked with evil magic due to the same symbolism. Black is most often associated with evil magic.

Then, there were the superstitions that were already old in Elizabethan times. The idea of the seventh son of the seventh son derives from the bible, the idea of touching wood is an ancient Celtic tradition and the belief that a peacock feather is unlucky relates to an old fear of the Evil Eye.

Finally, there were also some obvious practical reasons for believing that bad luck is associated with certain beliefs. It is the passing of time that causes people to forget why they were so worried, to begin with. For instance, walking under ladders was associated to the gallows and executions, if you were walking under the ladder it was likely you were also about to climb up these steps to your death. Equally, if you spill salt it would be bad luck because this spice was so expensive at the time. Now. we have a ritual of throwing some of the spilt salt over our shoulder to counter the bad luck – with no reasonable understanding of why this would help. It is just the belief that you can control the feelings of distress at such a loss.