Through time and around the world, good luck charms have been an important part of the way we express our culture. Whether as symbols of hope or just as a souvenir, the talisman is distinct to the place in which it emerges. Whether it is the four-leaf clover in Ireland, the dala horses in Sweden, the golden toads from China or the Scarabs from Egypt, there are all sorts of charms that are said to bestow the owner with better fortune. The fortune may come because evil is prevented from coming close or it may be that they give you a shortcut to the future you want.

While there is no scientific evidence that these tokens have any sort of power, belief is often not rooted in proof. For many of us they carry only a cursory meaning and we buy them as a novelty, as we are enchanted by the story and the meaning. However, some others are based in faith and tradition, where it is the Buddhas from Southeast Asia or the hex charms from the US Amish community. What makes them so interesting is the appearance of such totems in every culture throughout time, which goes to prove that superstition and luck are a part of human DNA.

We have a need for help when we are in trouble. We look to all sorts of places, people, and objects to offer us this comfort when feeling doubtful. Imagine the sports person who is facing the challenge of a cup final and is feeling that sense of dread and inadequacy. Suddenly, a lucky pair of pants or a twisting of a ring on a finger is all that is needed to ask for fate to be surely on their side. In World War 2 it was popular for pilots to fly with fuzzy dice for luck and surely this is a place where luck is essential.

It is likely that at this time in history the need for such comfort is required more than ever. There is the pandemic and the climate crisis, added to which we are under economic pressures. It is no wonder that people in Indonesia are making more tetek melek, traditional masks made from coconut palm fronds. In Mexico, the president is often seen with his amulets when he is taking a press conference on the coronavirus. Mexicans are known throughout time for seeking solace in milagros or miracles. Small metal charms are showing up in churches and shops depicting symbols that call for divine intervention.

Whether we believe in evil spirits or not, there are many of us who seek out support and protection from fate. These Antropic objects banish these bad spirits and have been used by humans for many thousands of years.

The oldest such symbol is the evil eye, which is the blue and white circles and orbs that are piled up in the markets and bazaars in Arabic regions. The orbs are meant to rebound away the destructive glance. It has its basis more than 5000 years back to the time of the Sumerians of Euphrates Valley.

Another object that can be found in the bazaars on the Silk Road is the hamsas – especially in the markets of Israel and Morocco. The hamsas is a hand-shaped object. For the Jews it is the Hands of Miriam, while Muslims know it as the Hands of Fatima. They are generally made in brass, tin or enamel amongst others. You can also buy them on necklaces and even on coffee mugs – you need this sort of protection in your morning meetings.

A lot of these symbols cross borders because they follow the trader paths. Therefore, although the cultures might slightly adapt the image or the folklore around the talisman. The symbols are often spun or adapted to a point they might not be recognisable – for instance evil eyes often turn up as triangular patterns in a carpet or on a tapestry. Equally, rather than a hand with five fingers, hansa appears as five dots or shells in an arc-shaped pattern. 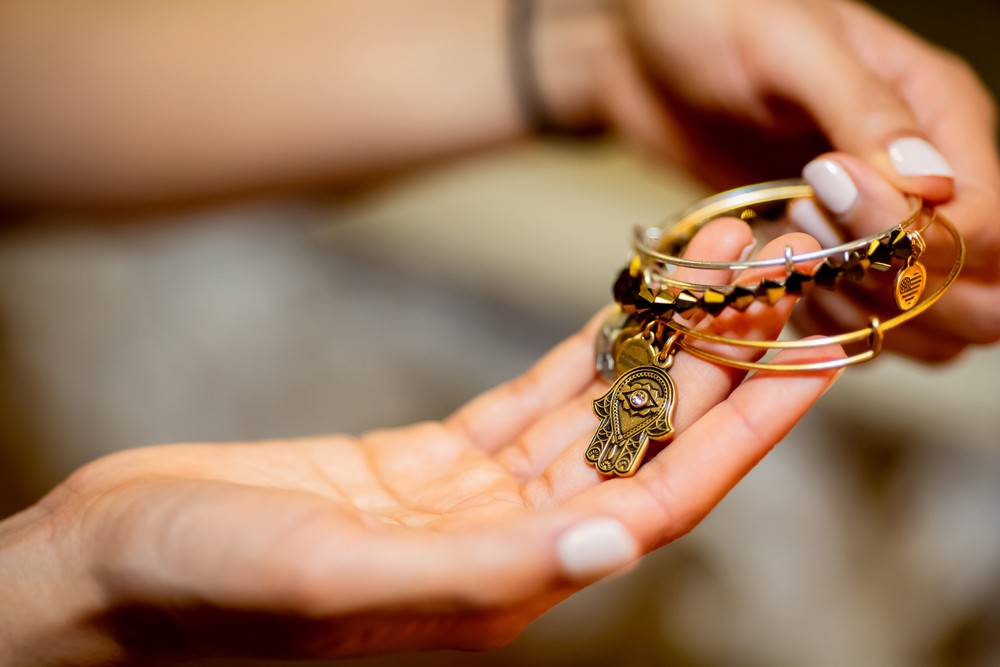 Creatures are lucky too

When you travel the world, you will find that animals carry luck too. In Thailand an elephant is lucky and in Peru it is the ceramic bull that offers protection. In Japan, you can purchase a meneki-neko, the waving cats in the doorways and restaurants. The beckoning hand is meant to encourage wealth and luck into your life. You don’t have to go full cat, you can find wind chimes, key chains and cups with the symbol on show.

Devotion to our faith

Although animals do dominate cultural understanding of luck, there are more prominent symbols and actions in our religions. So, rather than buy a waving cat you may instead want an omamori from Japan. This is a small silk pouch that contains written prayers and is sold at shrines and temples.

Alternatively, you may want to practice rituals. In England, it is good look to say rabbit a few times in the morning. In Serbia, you should spill water behind someone going on a journey. People in Spain wear red underwear and eat twelve grapes as the bell tolls midnight in the dawn of the new year. In Russia, you might knock on wood or pretend to spit over your shoulder.

Whatever the ritual or amulet, the act is a request for the protection from good in the fight against evil. The evil is in the eye of the beholder, as is the success of the luck. While people might swear these help them, it is likely that the act of relying on the talisman helps reduce anxiety and so improves performance. Rather than an intervention by fate, the object or action offers a sense of confidence and a belief that is going to work – and with this attitude we more often than not perceive success over failure.