With so many superstitions at play across South Korea, having a two-pronged good luck charm is a blessing for the communities who fear both evil spirits and bad luck. The Pujok has been a part of South Korean tradition for over 4,000 years and is still used by communities today to invite good luck into their homes and keep bad and evil spirits away.

The Pujok is identified traditionally as a yellow piece of paper which is often stuck above doors or on the walls in order to bring good luck into the home and to ward off evil spirits. However, it wasn’t always like that.

In ancient times, it seemed that the Pujok was primarily used as a way of warding off serious illness for the family, having been developed as part of a growing primitive religious community. By hanging the Pujok over the door to the family home, illness was said to be driven away by the yellow paper and the family inside would be kept safe. Other studies show that people would burn their Pujok and drink the ashes in order ingest its power of good luck and keep themselves safe from such illness and misfortune.

As time progressed, the Pujok began to be attributed more directly to self-driven good luck, with individuals reflecting their desires into their Pujok in order to generate their own good fortune. This is where it becomes interesting to really look at the appearance and presentation of the Pujok which is very deliberately displayed on yellow paper with red markings.

The use of the yellow is chosen because evil spirits are said to hate the colour – representing the Pujok’s ability to ward off bad luck and evil spirits. The red can be interpreted as the passion and strength of human emotions – representing the good luck that the Pujok brings when the possessor sets out on a mission which they are passionate about.

The Pujok is a common staple of good luck and good fortune in the South Korean community – but is there any evidence that it works?

As is the case with so many beliefs, evidence doesn’t matter so much as ancient tradition and the fact that the Pujok has been a staple in the family home for so long that it becomes factored into daily life – and it would be bad luck to not have it in one form or another.

There are Shaman’s who believe that the Pujok is as much about presenting the right attitude to life as it is about possession of the Pujok – with the Pujok bringing the confidence that people need to generate their own good luck. There are others who state that the Pujok is useless without the motivation and drive of the possessor to actively chase good fortune.

The different interpretations of the Pujok

If you search for images of a Pujok or see them out and about in South Korea, you might wonder why there are so many different patterns drawn onto them – and what the patterns all mean. The different types of Pujok are designed to ward off different ailments and evil spirits, and to invite different variations of good luck into the family home or the owners life.

While the generic ones provide all-round good luck and protection, these more specific ones have their own patterns and markings, with people employing Monks, Shamans, or specialist Fortune Tellers to specially prepare the Pujok based on their own desires and fears.

The meaning of the Pujok will often determine how it is used by the owner or possessor – whether they hang it in the home, ingest it after burning, or carry it around with them.

What is the Pujok made from?

The Pujok is an example of a tradition which has lasted well beyond the growth and implementation of technology – and is still used in its most traditional format to bring good luck and fortune to the holder. Other interpretations and creations, beyond the original format, are often dependent on the intended use and where the owner wants to keep or display their Pujok.

The original format is a yellow piece of paper with the red ink used to depict the patterns and drawings, based on the intention of the Pujok. Shaman’s and other makers sometimes also make Pujok’s on small pieces of wood – and will draw the red ink from Cinnabar or from the blood of a chicken or white horse, to bring extra good luck.

As has become the reality of so many beliefs and ancient traditions, as well as their intended use Pujok’s are now regarded by many as works of art – and will be purchased by travellers as well as local communities.

Today, many of the more modern Pujok’s resemble and reflect desires that differ greatly from the ancient interpretations – largely because of the change in attitude and the changes in the way society lives. For example, while the earliest Pujok’s are designed to ward off and drive away the evil spirits, illness and ailments that might have struck a South Korean family, today the desires that are reflected onto modern Pujok’s as much more material and driven by wealth and fortune.

The Pujok is a talisman that has two distinct forms. One is specifically a good luck charm and the other is a ward that protects from bad luck, misfortune and evil. The Pujok is frequently used by shamans and is very common across the Buddhist faith, though it has become a ubiquitous symbol of good luck across much of contemporary South Korean culture.

History Of The Pujok Luck Charm

South Korea has a long history of shamanic and ancient Buddhist worship and religious practice. Ancient rituals and folklore still feature heavily in South Korea’s mystical culture and many of the various charms, stories and icons last to this day. The Pujok charm or talisman is one such ancient icon and symbol and is most commonly comprised of red painted or drawn symbols upon a yellow background. Yellow has long been thought to ward off bad spirits, people have felt the spirits of evil and misfortune dislike the colours of gold and yellow. Red represents passion, fire, blood and strong or powerful human emotions. The combination of these two colours gives the Pujok its simultaneous ability to bring luck to the living whilst warding off bad spirits from the dead and beyond. Formerly, people were known to burn the Pujok and drink its ashes to bring permanent good luck and protection to those who consume it but now, it is more frequently used as a poster or talisman.

Why The Pujok Brings Luck 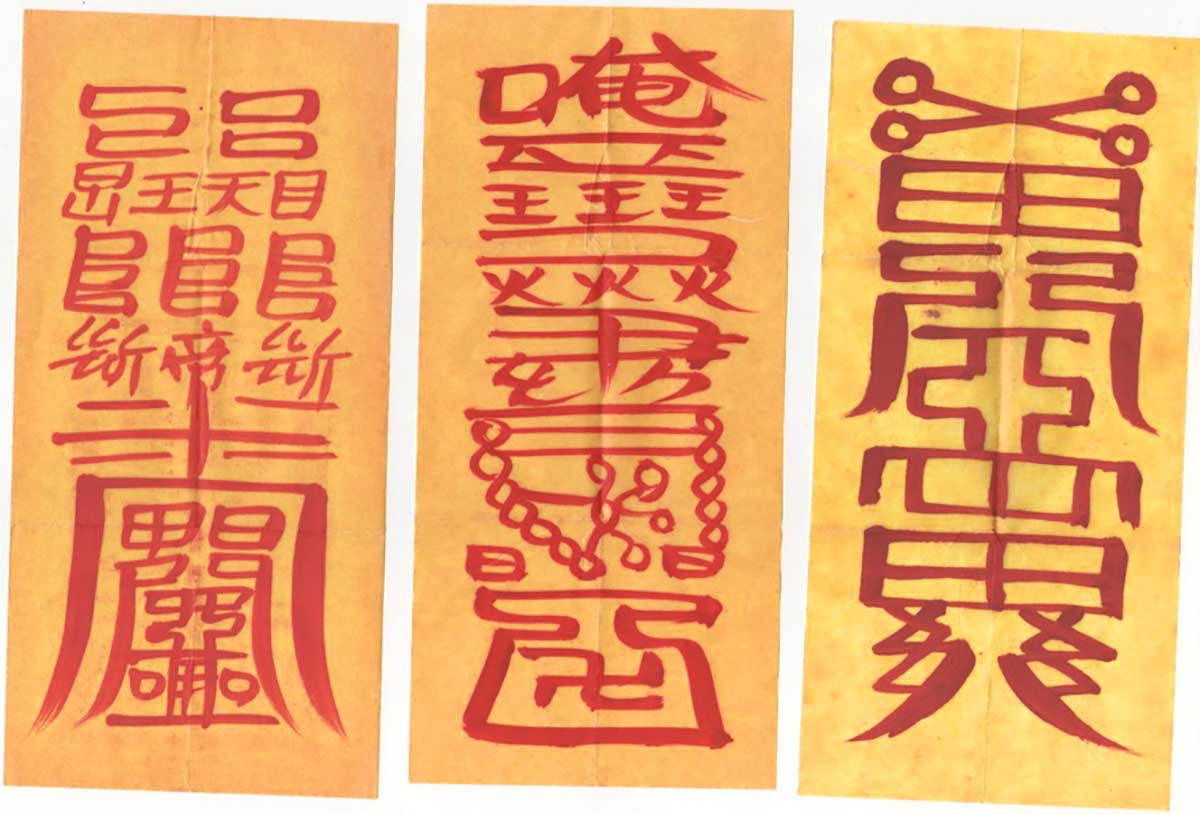 The Pujok is an age-old symbol that has existed in Buddhist and South Korean culture for 3000 to 4000 years. It has lasted to this day and is still viewed in a similar light, the Pujok is a mystical symbol that has always been known to ward off bad spirits whilst bringing good luck to those who bear it. Though two Pujok symbols exist, both can be combined into posters and talismans. Pujoks can be customised by the shamans and Buddhist monks who create them to specifically ward off ailments and bad health.

How To Use The Pujok Charm

The Pujok charm is most frequently incorporated into posters but can be kept as a portable talisman carved into stone or other material and painted in the characteristic colours of yellow then red. The Pujok is used via its mere presence, bad spirits are compelled to exit the vicinity in the presence of the Pujok. The Pujok is often kept above doors or in homes and can be seen suspended in alleyways or other public spaces. Pujok talismans are kept in pockets and wallets so people can carry around the Pujok’s warding and protective power wherever they go.

How The Pujok Charm Is Made

The Pujok is a printed or handmade charm that features drawn symbols in red on a yellow background. Pujoks are bought from shamans or Buddhist monks who are informed of the traditional methods to create and bless the charm.

How To Make Pujok Charm At Home

The Pujok could be copied in your own medium but the best Pujoks are invariably bought from shamans or monks who are able to authentically craft the Pujok charm and bless it. Still, it would be possible to create your own Pujok by using authentic inks and papers, you could then bring it to a shaman or monk for their approval and blessing.

Interesting And Fun Facts About The Pujok Charm