On a practical level, a horse needs its hooves to be shod in iron to allow it to travel on harder surfaces without damaging its feet. Iron his heated to a degree that means it can be bent round into an arch and seven holes are pierced into the hot metal for the nails. The shoe is then hammered onto the horse’s hoof.
In the beginning, the shoe for the horse was nothing more than a primitive sandal. However, in the modern world of the farrier, the horseshoe is a high-tech innovation. It is a means of maximising the productivity of a horse when travelling of varied terrain. Sore feet would make valuable horses’ easy prey, so it made sense for horse owners to use these shoes to protect their valuable stock.
The sensible question to ask now is how on earth can such a practical object turn into a powerful symbol of luck?
You may have travelled and at some point seen an iron horseshow hung above the front door of a house. The stories of why people do this date back as far as 959 AD. Here we explore why these stories link the horseshoe to luck.

Irish culture and the horseshoe

Despite being a symbol typically associate with the western cowboy culture, the luck of the horseshoe connects most powerfully to Irish folklore and history. The story of its luck has a lot to do with the devil and the shoes roll in warding off the power of evil.
Let’s begin with the story of Dunstan. In the 10th century St Dunstan, working as a blacksmith at the time, was visited by the devil. It must have been a shock to the ironworker, but he demonstrated great fortitude. The devil had hooves instead of feet and he wanted the blacksmith to create him some shoes. Dunstan nailed red hot horseshoes tightly to his hooves leaving the devil howling in agony. The devil begged for mercy from Dunstan, but the soon-to-be-saint wanted to make a deal. He said he would remove the shoes with the condition that the devil must always show respect for the horseshoe. Any house with a horseshoe hung above the door and the devil must never enter.
This is the story that has led to people through the centuries believing that a horseshoe above the door could help keep evil spirits out of their homes. Without the presence of this evil, the home is was free to experience the life of good fortune and positivity.

Although this is a powerful story of the devil and a saint and the Irish are known for their luck, there are other reasons for the shoe’s luck. Many believe that the blacksmith is a lucky trade and most put this down to the spiritual symbolism attached to iron. Iron is the only metal that can withstand fire. Therefore, have any symbol cast in iron would increase its value in luck.
There is also the number of holes tapped into the shoe. There are seven – which is considered one of the luckiest numbers through time. There are lots of reasons why seven is a lucky number. God made the world in six days and rested on the seventh. The word creative is used seven times for God’s creative work. In Judaism, there are said to be seven heavens. In Chinese culture, the number 7 is a lucky number in relationships – it is also the day on which the Chinese Valentine’s Day falls and in the seventh month in the lunar calendar. Finally, it is also the maximum number of items we can store in our short term memory – so continues to be significant throughout our lives wherever you look.
As time passes, the myth and folklore of the horseshoe grow. The 12th century Crusades are also thought to be a source of the legend behind the horseshoe. The horseshoes were accepted as payment for taxes at the time. A lucky silver shoe was often nailed to the bottom of a horse’s foot just before a parade.
In the middle ages, the fear of witches was powerful. People thought that if they hung a horseshoe, then the witches would not be able to enter their home. Iron nails were used to seal the coffin of the witches’ coffins that were killed at the time. Many believe that a horseshoe has the power to repel a witch in the same way as a crucifix can deal with a vampire. 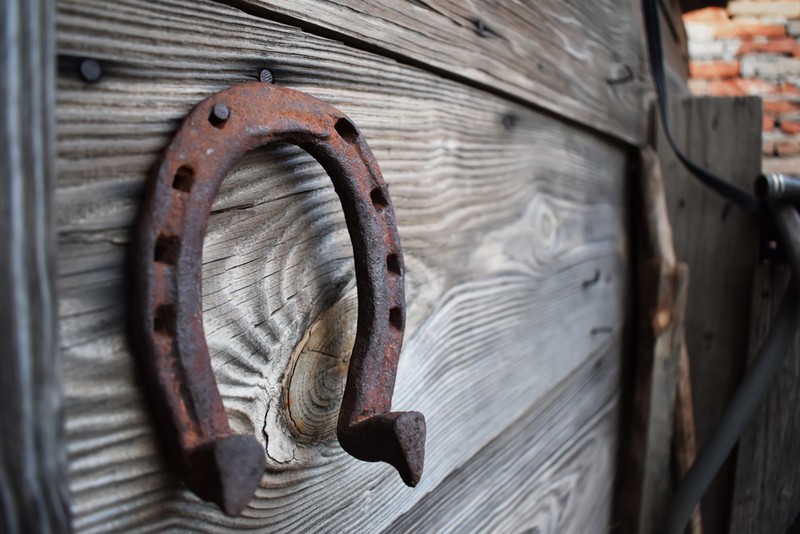 Heel up or heel down

There is a strange debate about the way you should hang a shoe in your home. Many believe that you must nail the horseshoe with the U facing upwards to keep the evil out and the good luck in. However, if you turn it over, the luck will flow out of your home and will become a symbol that will bring negativity to the house.
However, this is open for debate. Many people feel that the heels down will shower good luck over all who enter the house. Therefore, the shoe should always be hung to allow the luck to flow out. This seems like a symbol of positivity.

Whether it is because it has a protective force against evil or if it is because iron is bestowed with mystical power or that there are seven holes for luck on top, the horseshoe will continue to be a symbol above our door. We will use it to give luck or retain luck for our home, whether it is heels up or heels down. You can make your choice.